Each mildly important city in the country has at least one of these so-called ‘fake markets’ where you can buy almost anything, either bulk or retail, and Zhuhai is no exception. Gongbei Underground Market (拱北地下广场), officially called Gongbei Port Shopping Plaza (拱北口岸购物广场) is one of these mazes of the modern consumerism in China. 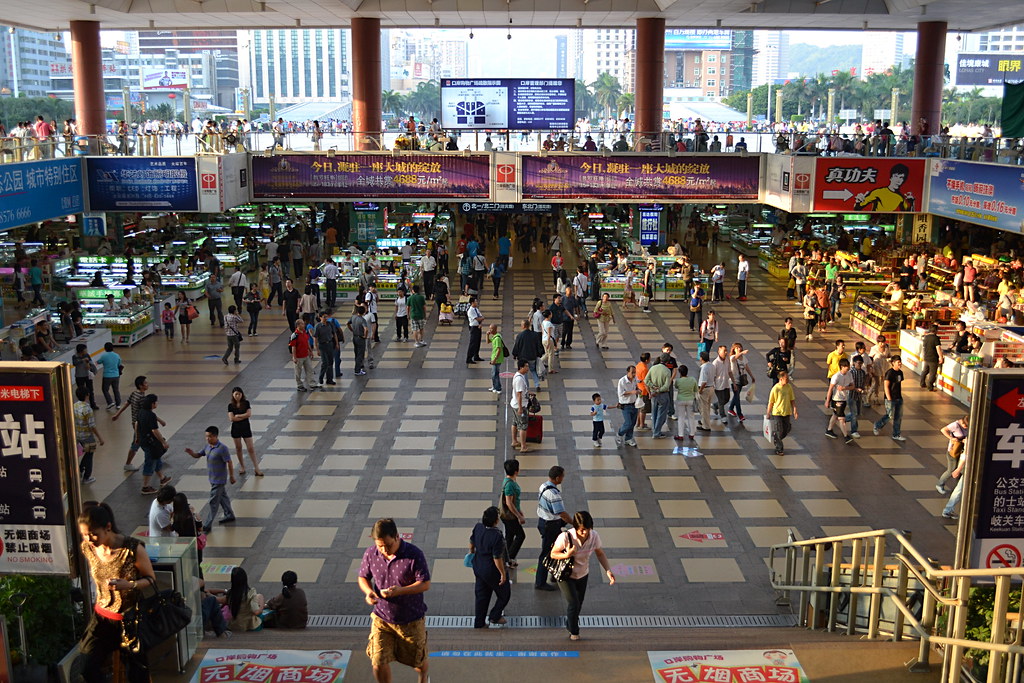 Its  privileged location makes this market the main and most vibrant commercial hub in Zhuhai; an epicentre for both business and tourism, with Macanese hurrying to the mainland to buy cheap, and Chinese going the opposite direction to lose their savings at Macao’s casinos.

At the Underground there is room for everything, and this is besides the counterfeits and knock-offs: it has restaurants, pharmacies, coffeehouses, pet stores, and of course clothing, watches, jade and jewellery, trinkets, watches, purses, music, electronics, photography, DVDs and gaming, RC toys, communist memorabilia… and the list can go on forever. I am pretty sure that what they do not have is human organs, but I am not even sure about it…

There are no hidden doors here, no secret rooms as you will find in other ‘fake markets’ in China. Merchandise of any kind is sold openly as ‘surplus’ from the factory or as an original with a manufacturing flaw. Well, the excuses can be endless as well, but they will never admit to sell fakes or counterfeit.

So well, let’s try to summarize the most remarkable products you might find in here:

They are the main product sold at GUM, along with food, maybe. Chinese, Korean and Vietnamese manufacturers converge in Gongbei, either originals mimicking well-known brands or blatant copies that rival the originals. Gucci, Prada, Vans, Converse, Bikkembergs, Levi’s… you name it, and if they don’t have it, many shops will ask you to come next week and see if they got hands on something you might like. Take into account that many times they sell products that look exactly like the design of a renowned brand, but they are labelled with a local brand, so good hunting!

One of the main magnets for the Macanese visitors at GUM are the counterfeit luxury watches, reproductions of different quality of any existing brand, like Rolex, Breitling, Patek Philippe, Movado, Omega, to name just a few. I’ve made a post comparing the quality of a counterfeit Vacheron Constantin against an original, so you can see how good a replica can be, as well as how to deal with the sellers and their sales tricks.

Game consoles were banned in China from 2000 until January 2014. In the meantime, piracy and smuggling of consoles soared in the country, and GUM is no exception. The consoles are smuggled from Hong Kong or just made in China as counterfeits, as well as other platforms like Nintendo DS, PSP, Xbox and all their possible accessories. These consoles are not popular, as Chinese gamers predominantly play computer and mobile games (click to enlarge)

The product of the year (well, by the time I was there), were the Beats by Dr. Dre, in a perfectly duplicated box, Heartbeats by Gaga and the Dyson Bladeless Fan. Well, counterfeits of them. Also, the always present Apple products and accessories (click to enlarge).

Music, games, software, movies, TV series from anywhere in the world… anything that can be downloaded and burnt into a CD or DVD is on sale here. This (shaky in the beginning) video below is a good example of counterfeit software and games, as well as how neatly and well packed they are sold. Prices range between 10-15¥ per movie, game or software with the serial numbers included when needed.

Note the quality of the packaging and their prints. They are so meticulous with the copy that they even stamp the Blu-Ray label, being a plain DVD. Some shop managers told me that the factories, which make the original cases, make some extra money by selling an artificial surplus to them.

Flattened cases are used to save space in the racks

The quality is not Blu-Ray, of course. Some episodes or movies are crudely bootlegged, and you might get the wrong language or subtitles, among many other mistakes, but you can always go back to the shop and ask for a replacement. For many it is a Chinese Netflix, where you can ask for what you want and get it next week. If it exists, they’ll have it, sooner or later.

Despite they should be included under the precedent title, Apple’s products monopolize shelves and counters at each electronic retailer. Not only accessories and peripherals (like the Beats, and Gaga Heartbeats, for example), but also functioning iPhone, iPads, and even products that look from the ‘next season’. These shops with alleged “Apple” products are not afraid of displaying brand logos everywhere in order to appear legitimate : how it can be a fake when they are so obvious and exposed? In Zhuhai alone I counted three fake, perfectly duplicated, Apple stores…

It seems that everybody is an “Apple premium reseller“: an elegant way to say ‘We’re selling fakes with pride and ‘. Anyway, they’ll swear it’s an original Apple, a surplus, or that they are resellers, or a branch of Foxconn authorized to sell flawed products, and so on… And you’ll swear it is original. They don’t call it copy for anything…

The best way to calm down an angry wife after spending all your savings at the Casino is buy one of these before going back home.

Luxury handbags are quite popular among Macanese female tourists, like the luxury watches for men. Again, if they don’t have a specific model, they will have it in the next days, or just look it up at another shop, ask around.

Macanese casinos accept only Hong Kong dollars, not Renminbi, nor Pataca. Also, the biggest banknote in China is a 100¥ bill, and if you plan to spend some money at the Venetian, you’ll end up carrying huge stacks of money, specially when you don’t want the Chinese Treasury to find out about the cash you saved from them to be spent in the roulette. In order to avoid all these nuisances, mainlanders going to Macau make a stop before the Port of Entry at one of the many secret bureaux de change making a living on the currency exchange. 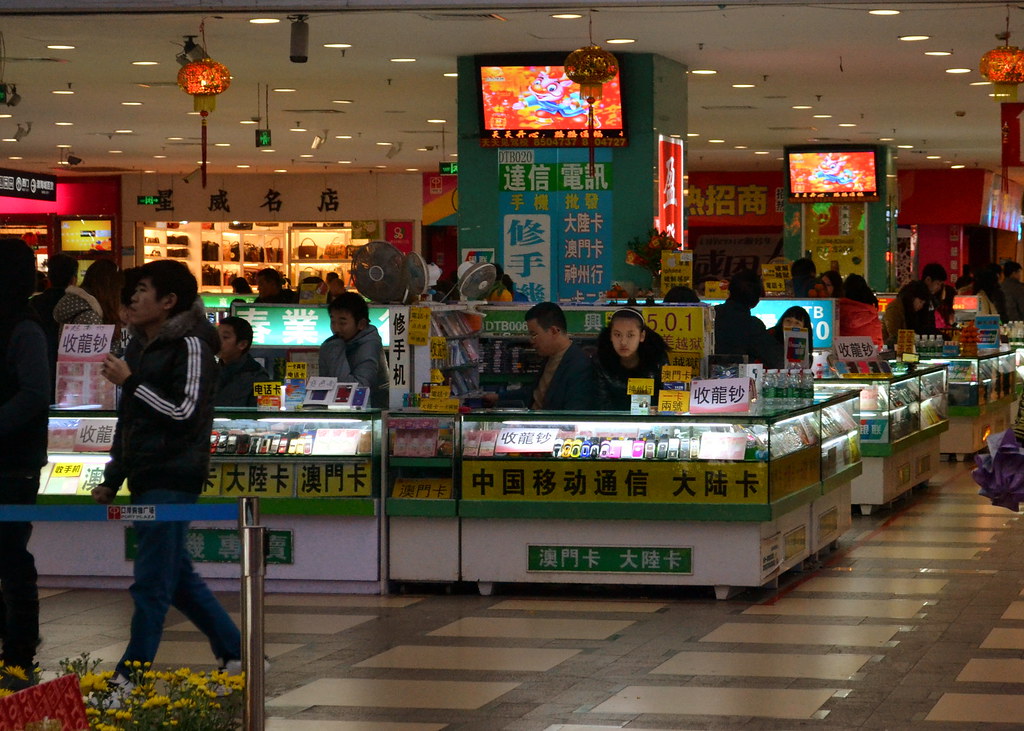 These exchange stalls are located next to the stairs before the entrance to the China – Macau Port of Entry (see the maps). They can be seen in the first picture of this post, with some presence on the corridors nearby, and they all seem to sell water bottles, tissue packs and random mobile phone accessories, but when you pass by, they all go frenzy waving a calculator to you, just like the money exchangers at Calle Benito Juárez from Culiacán, because the real product they are selling is the money exchange.

Needless to say, this kind of currency exchange is absolutely illegal in a country where the exchange rates are fixed by the government and the only authorized spaces to do so are the banks…

And of course, there are many other products, from RC toys, chopsticks, chinese secret boxes and memorabilia to trinkets and jewelry, military surpluses and a boatload of randomness…

You might think about some kind of law enforcement at the market, but Gongbei Underground is the core for too many businesses in Zhuhai. If the police or the local administration really want to start cracking down on the shops there, it would start a nasty a domino effect, not only for the market itself, but also for the neighbouring area as well as the many companies and business depending on the affluence of people in there. Sometimes, they do close down a shop here and there, very occasionally, but business never stops…

My apologies on the quality and composition of some shots: cameras are not really welcome at Gongbei Underground! 😉

Read more on Gongbei Port Shopping Plaza at the article linked below, which compiles all the articles about it, including a map of this maze as well as several useful guides to get around: